Built in 1444, Bey Hamam is the oldest off all the Ottoman baths in Thessaloniki and one of the most important buildings that integrate Ottoman architecture. It is located in the center of the city north of Aristotelous Plaza 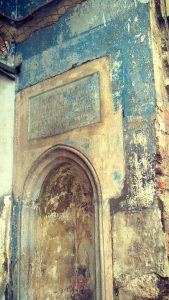 Bey Hamam was constructed by Murat II after the Ottoman invasion in 1430. The baths are considered among others, a basic element of the Ottoman culture. In terms of art and decoration they are considered unique for their impressive colorful designs and wall paintings that include rich series of painted depictions of plants and other elements.

Marble basins and low marble benches can be found in most rooms while the traditional massage table in the center of the main room still survives. Some of the rooms have beautifully decorated domes with small openings on the top that allows natural light to enter thus creating a beautiful sight!

I’m not sure how to succinctly say all of the wonderful things I would like to express about this language school and its teachers – but I am so grateful to have found them and to now consider them friends! Thank you Peek at Greek!

They clearly have a passion for linguistics, and don’t just teach you vocabulary but truly facilitate a deep understanding of the language and the country. They are intentional about connecting people and respecting the different traditions of Greece while also welcoming newcomers and honoring diversity and global perspectives.

The lessons were perfectly tailored to our wants, needs and level.

The teachers made a rapid and accurate assessment of our individual level in: Reading and Listening comprehension; speaking skills.

The programme was varied, stimulating and appropriate with an engaging mix of vocabulary, grammar and a rich variety of content.

Varying the lessons between the teachers was great and helped to maintain our interest throughout the course. They were wonderfully patient, engaging and ready to answer all questions and accept our suggestions.

There was an excellent balance between formal language work in the classroom and the exposure to cultural and social use of the language through visits and experience of everyday Greek life.

Visit to Turkish bath house was excellent and gave an insight into Thessaloniki’s past.

The visit to both covered markets provided a great opportunity to practise some of the vocabulary learnt in the classroom.

As I was less interested in becoming fluent than functional, we spent a lot of time covering useful phrases: greetings, ordering, traveling, asking for directions, etc. We traveled around Thessaloniki, giving me some sense of direction in the city, and stopping to practice in markets and restaurants. The experience was a lifesaver!

I can’t recommend enough the fantastic courses at Peek Greek. What drew me to the school was the fact that they layered grammar, practical skills, history and external activities. A definite highlight of my time in Greece! The course structure was great. Challenging enough that you push yourself and really see results, but not so challenging that you feel like you’re in the deep end. Both educators are excellent teachers, and have put a lot of thought of how to teach not just the Greek language, but to give you an insight into Greek culture and history as well.

Jeff D.
We use cookies on our website to give you the most relevant experience by remembering your preferences and repeat visits. By clicking “Accept”, you consent to the use of ALL the cookies.
Do not sell my personal information.
Cookie settingsACCEPT
Manage consent

This website uses cookies to improve your experience while you navigate through the website. Out of these, the cookies that are categorized as necessary are stored on your browser as they are essential for the working of basic functionalities of the website. We also use third-party cookies that help us analyze and understand how you use this website. These cookies will be stored in your browser only with your consent. You also have the option to opt-out of these cookies. But opting out of some of these cookies may affect your browsing experience.
SAVE & ACCEPT